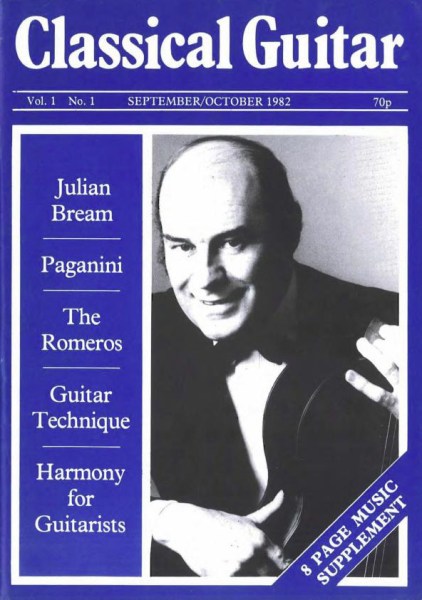 Sorry to see that it (Classical Guitar) has left the UK for greener pastures, but happy that it will be invigorated. It has been an old friend!

During the 1890s, hundreds of similar ladies’ bands were formed across Britain, mostly by middle-class women. The quality of musicianship varied widely, but some were undoubtedly of a high musical standard. The Clifton ladies’ band, led by Mabel Downing, maintained a considerable reputation in the Bristol area, while Clara Ross’s band was highly regarded by fashionable London society. Clara composed most of her band’s music, and became one of Britain’s most popular composers for mandolin. She subsequently emigrated to the USA where, as Clara Ross-Ricci, she became a noted singing teacher and composer for women’s voices. By the late 1890s, as British society was becoming more liberal, more mixed-gender ensembles appeared, although most bands were still overwhelmingly female. The largest was the Polytechnic Mandoline and Guitar Band, founded in London in 1891, which regularly gave concerts with as many as 200 performers and continued performing into the 1930s.

Here is the link to this fascinating article by Paul Sparks – a curious chapter in the history of plucked instrument ensemble, many of which are still around today.
I am particularly interested to know of the works of Madame Sydney Pratten, whose pieces I have recorded, and of course,the guitar ensemble aspect. (Please see diary for schedule of the National Youth Guitar Ensemble!).
Many thanks to Nigel Warburton for drawing my attention to this article. The National Youth Guitar Ensemble are performing at St.John the Evangelist, Oxford,UK on the 9th of April 2015.

The programme will consist of original compositions for guitar ensemble including:

Gary Ryan – Flower of the Field

Previous to this concert they will be playing on 8th April, 6.00pm at the Thomson Hall in Abbots Bromley School, Stafford.

Sean Shibe was born in Edinburgh in 1992, and is currently studying guitar at the Royal Scottish Academy of Music and Drama, under Allan Neave. His musical education was grounded in the Scottish National Centres of Excellence from the age of 9, firstly in the City of Edinburgh Music School. Shortly after turning 14 he moved to the Aberdeen City Music School to commence study under Allan Neave. When 15 years old he auditioned for music conservatoires, receiving scholarship offers from the RSAMD, Trinity College, and the Royal College of Music in London. He received his ABRSM Diploma (perf.) with distinction in the Summer before assuming his place in the RSAMD, as the youngest musician to ever enter the establishment. Upon graduating he received honours of the first class.

He has worked with such groups as the Barbirolli Quartet, the Scottish Flute Trio and Scottish Opera, and is in regular demand as a soloist from guitar festivals around the United Kingdom, having performed at Dundee Guitar Festival, Big Guitar Weekend and Ullapool Guitar Festival. In 2009, he was invited by West Dean International Classical Guitar Festival to perform the first movement of the Brouwer Sonata to the maestro himself. In addition to these invitations, he has performed recitals and as a concerto soloist to critical acclaim in the United Kingdom, China, Holland, Germany, Liechtenstein and has featured on the BBC and European television and radio.

He regularly collaborates with composers in reworkings and new compositions to consistent critical acclaim, so far having premiered seven new works. These include a reworking of Jacob’s Ladder by Halfidi Hallgrimsson (Icelandic Symphony Orchestra composer-in-residence) in his first recital series in the 2008 Edinburgh Festival Fringe. In the annual PLUG new music festival of 2009, his premiere of Marek Pascienczny’s Sequenza for guitar solo was reviewed as: “pure magic…the best acoustic guitarist I have ever heard…Sean Shibe…remember the name, one day he will be famous” (Michael Tumelty, The Herald).

He also competes on an international level – in 2008, aged 16, he was a finalist in the first senior competition he entered, “Westfalian Guitar Spring” in Germany, and later that year received the Chanterelle Guitar Prize. The following year he won the Royal Over-Seas League Len Lickorish Award for a String Player of Promise, was awarded second place in the LiGiTa Liechtenstein International Guitar Competition and Festival, and first prize in the Ivor Mairants Guitar Award of the Worshipful Company of Musicians. In November 2010 he won the North East Scotland Classical Guitar Society Award, and 3 months later, in London, won the String Section Final of the Royal Over-Seas League Music Competition. In May 2011 he was awarded 3rd prize in the Anna Amalia Guitar competition in Weimar and 2 weeks later became only the second guitarist ever to win the Royal Over-Seas League first prize and gold medal. In February 2012, following nomination and shortlisting, he became the only solo guitarist to have received a Borletti-Buitoni Fellowship. Highlights of this season have included a Wigmore Hall debut and sell-out performances at the East Neuk and Brighton Festivals. Later this year he will make his debut with the BBC Scottish Symphony Orchestra, performing Rodrigo’s Concierto De Aranjuez under Andrew Manze.

I first met Sean when he joined NYGE in 2005. He was around 4’8”when we first met.
He is now an artist of growing stature.

If you can receive BBC playback, this is a great link to listen to his work as a BBC new generation artist.Here is a link to an interview in the Scotsman.

Last year, just before Christmas, we had a shed party which was rather special. Simon Mayor and Hilary James joined me in the shed to play trios. The fourth member of the Mandolinquents, Richard Collins (banjoist and polymath) found himself playing with Joe Brown and we were reduced to a trio.

Here is an excerpt of that gig, complete with colourful clothing!

Some more Mandolinquents with everybody–

Get our latest CD

The OGS is going great guns at the moment – Haydn Bateman and Jack Hancher, both at the Royal College of Music in London and ex alumni of the National Youth Guitar Ensemble will be playing on Sunday 8th Feb in Sandford Village Hall, near Oxford.
Daniel Stachowiak has already played twice for them, and they have put on concerts in Oxford for Cheryl Grice, Ray Burley and John Mills, amongst others.

Here is a gallery of some performances.

The society owes its renaissance to the work of a dedicated committee and the time given by :

If you are in the area, please do come along!

Recording of a radio broadcast of a studio concert by Julian Bream in 1986.
Bennett: Impromtus, Sonata (first broadcast performance) In 2002, I was invited to write a concerto for the Christée-Baldissera violin and guitar duo. This was performed in the German town of Bad Munder.
I finished the piece in a couple of weeks and heard nothing from the duo or the conductor for weeks. Jeanne Christée requested a more virtuosic final movement which I rewrote as a tango and battle between the soloists and the orchestra!
Finally I received an invitation to attend the concert and worked out how get to Bad Munder.

It was quite a journey, compositionally and geographically.
Alison and I got off a train at Bad Munder to find the station was in the middle of the countryside with no clue as to where the town was. Far away on the horizon there was a steeple, so we headed out towards it across snowy fields. It was indeed the town, but there was absolutely no one around.
I had never heard the duo and luckily they had the music down to a tee despite problems with the guitar amplification. We spent the rest of the day wandering around the snowy ghost town. It was beautiful, with traditional north German wooden houses.
In the evening, there were suddenly hundreds of people attending the concert – where had they all come from?

Many years later, my friend Sergej Krinicin of the Baltic Guitar Quartet asked if he could play the piece – he had a duo with the violin virtuoso, Vilhelmas Cepinskis.
Vilhelmas wanted the concerto rewritten for symphony orchestra, but it was originally conceived for strings! We finally agreed it should be played in its original form, and the concert was given in February 2013 but the Lithuanian State Symphony Orchestra conducted by Robert Bokor.
This was a big concert which was televised, and I managed t get an audio recording of the whole piece.

Here is the middle movement:

Here is the audio of the complete concerto

The National Youth Guitar Ensemble is currently looking for young talented guitarists who have a passion for performing and interacting with like-minded musicians to audition for the ensemble’s 2015 courses.

If you know of a gifted guitarist aged 13-18 years old, that is of at least grade 6 standard then NYGE would love to hear from them.

Details below
Link to the audition flyer :

Auditions are taking place in January at the following venues:
2015 AUDITION DATES & VENUES:

The National Youth Guitar Ensemble offers the highest standard of ensemble training in the UK to young aspiring guitarists. Directed by guitarist/composer Gerald Garcia, the NYGE is currently made up of twenty four of the UK’s finest young guitarists.

Successful candidates are invited to attend two residential courses per year. Bursaries are available to students in financial difficulty.

Applicants need to be 13 – 18 years old on the 1st September 2015 and the equivalent standard of grade six or above.

For late applications please email the Co-ordinator for availability.

Successful applicants are invited to attend two residential courses at Easter and in the summer led by Musical Director Gerald Garcia. The VIDA Guitar Quartet performed with NYGE for the 2014 concert season. Other past artists and conductors with NYGE include Leo Brouwer, Gary Ryan, Chris Susans, Carl Herring, Belinda Evans and Keith Fairbairn.
Bursaries for the courses are offered in cases of need.

Applicants can apply for an audition online here