Segovia on Flamenco Guitar, Song and Dance – from Guitar Review, 1977

Segovia’s stated credo was that he, like the Blues Brothers, was on a mission from God — well, maybe not God, but a sort of holy mission — to rescue the guitar from the taverns and the associated lowlife folks in whose hands it was then found. Obviously, he could have problems with flamenco.
Well, not quite, as it turns out. 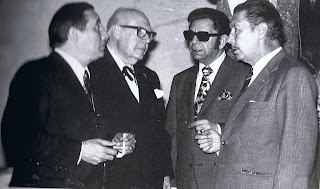 Thanks to Brook Zern of the Flamenco Experience for this fascinating article.

Segovia: “I love the flamenco, but the TRUE flamenco — not the flamenco heard these days. The flamenco guitarist of today has removed his attention from the ideals of yesterday, when this noble art was prized for a depth of emotion which could be produced by a certain simplicity of approach. Today’s guitarists are more theatrical, they want to show their technique, to dazzle the public with pyrotechnics…” Read more