“Korpijaakko is clearly at home with the musical possibilities of the guitar with the solo guitar sonata Kimberley (2006), a standout as one of the most remarkable works of recent years for solo guitar composed in Finland.”
So writes a critic in FMQ, Finnish Music Quarterly.
Intriguing, no?
Here is a CD of guitar music by the Finnish guitarist and composer Paavo Korpijaakko performed Petri Kumela by which I think deserves to be better known 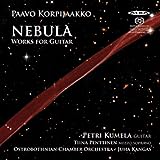 Here is a list of his works, including the tremendous La luna di paradiso (2010) for 100 guitars!
“Petri Kumela plays with breathtaking virtuosity and intensity throughout. He plays as if he has a proprietary interest in this music, and of course he does. Beautifully deep plush surround sound from Alba makes this even more a program and composer worth exploring for the adventurously inclined.”
Read the full review by Lee Passarella here

Listen to some samples here

Here is s  programme of Kumela’s when he played at the South Bank in London, sponsored by the  Latin American and Caribbean Cultural Society! They are a good lot, also hosting Sean Shibe’s win at the Royal Overseas League Competition.
The programme contains a few unfamiliar names – Wennäkoski, Pulkkis, Mylärinnen, Yli-Salomäki, Talvitie and Michael Parsons all contributing to “Small Creatures, a musical encylopaedia in the making”.  I’m beginning to feel I have led a sheltered life. Must go look them up!

One thought on “Nebula, Spaceship of Dreams”