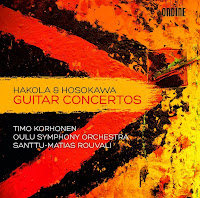 Following hard on the the heels of  works by KORPIJAAKKO, there is another Finnish Guitar Concerto recording – in fact, world première recordings of two Guitar Concertos: one by Kimmo Hakola and the other by Toshio Hosokawa. These are performed by Timo Korhonen – the guitarist for whom the concertos were written – and the Oulu Symphony Orchestra conducted by Santtu-Matias Rouvali.

Timo Korhonen is one of the world’s most acclaimed guitarists. He has premiered over 40 new works during his career, and has made several critically acclaimed and award-winning recordings.
He was also artistic director of the Suomenlinna Culinary Concerts in Helsinki, which means he likes food, probably! He is also Co-Founder of the international Sibelius Guitar-project.
Here he is playing some Bach

and here is the Hakola concerto