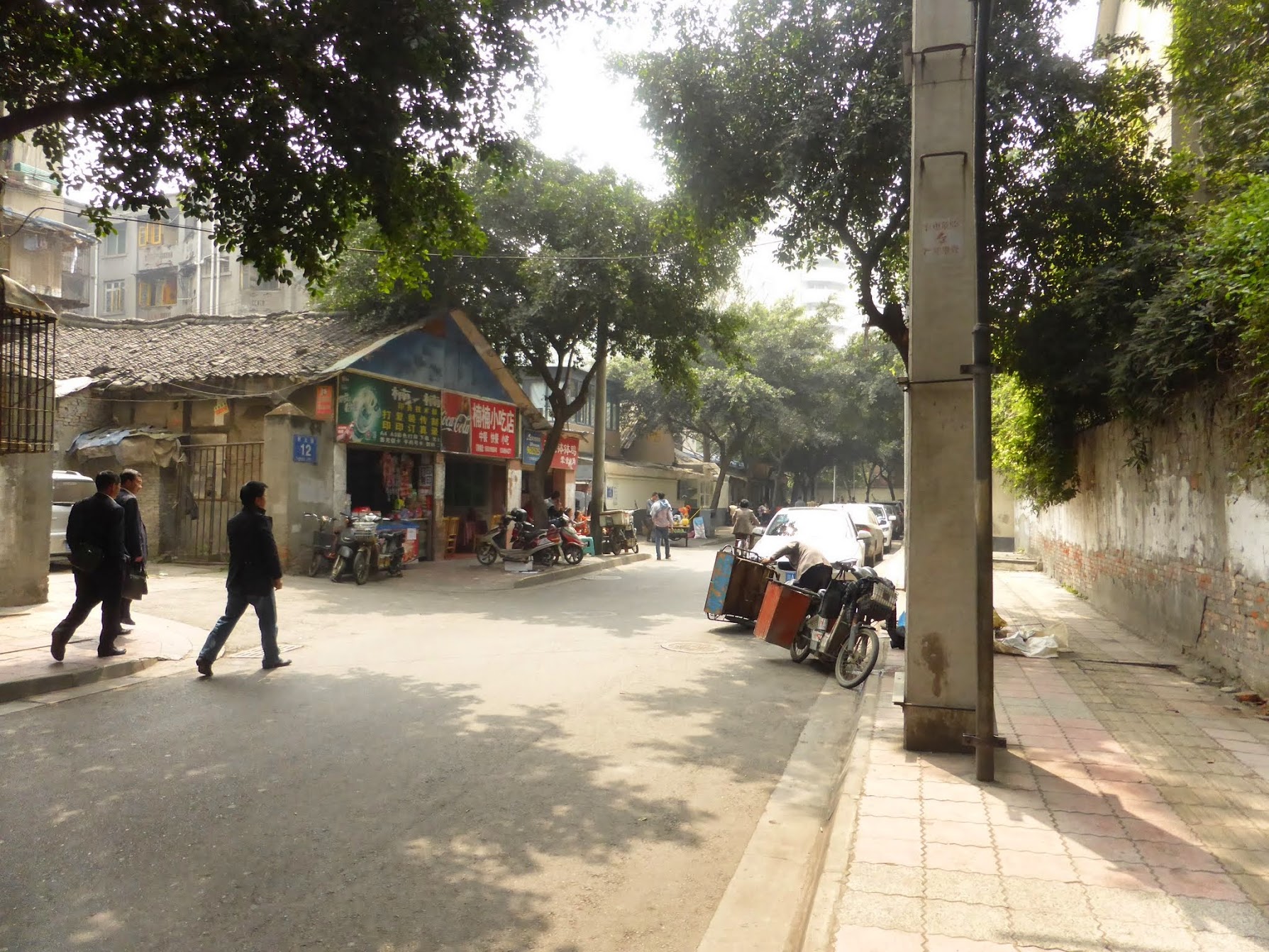 It was back to Chengdu last month to teach some of Professor Xu Bao’s students. This was a special trip because I was also the CD producer for Kuang Junhong’s first CD (at the age of 14). He really is something, and I hope you will enjoy the CD when it is released by Naxos.
There is  a youthful optimism about his playing, but there is also the odd touch of masterful genius which comes through. Needless to say, his technique is flawless.
As he is very dedicated, I am sure he will mature into a wonderful musician.
His teacher says that to play an instrument well, you have to be first and foremost a good human being, with heart. (The other thing he says is that his students should have experience with other teachers and to this end he has invited many teachers from the West at his own expense, so that his students can absorb as many influences as they can).
It was very cold  in the Main Concert Hall of Sichuan Conservatory, which was having a lift shaft installed during the day (and there are also 900 practice rooms all around making a  Babelicious cacophony), so we had to record until late at night. It amazed me how many people were out on the street still eating at 4.00 am!
Junhong was the ideal person to record – he was always on the ball musically, and could intelligently work out edit points where necessary. There were a few pieces which were recorded as whole takes, and he can instantly absorb a musical or technical nuance.
During the day, we had lessons on the pieces, including his (by now famous) Chaconne by Bach. There was also Tedesco, Granados, Albeniz, Legnani and Mertz.

What was unusual about the evenings was that I also recorded another guitarist consecutively – Chengbin from Shanghai, who has not made a CD before although he is quite a bit older than Junhong. His background is in Chinese Opera and he is a very instinctive and lively player. His CD was entirely of Brouwer, made for the sponsor of the recordings, Altamira.
Both players used Altamira guitars exclusively for their CDs. 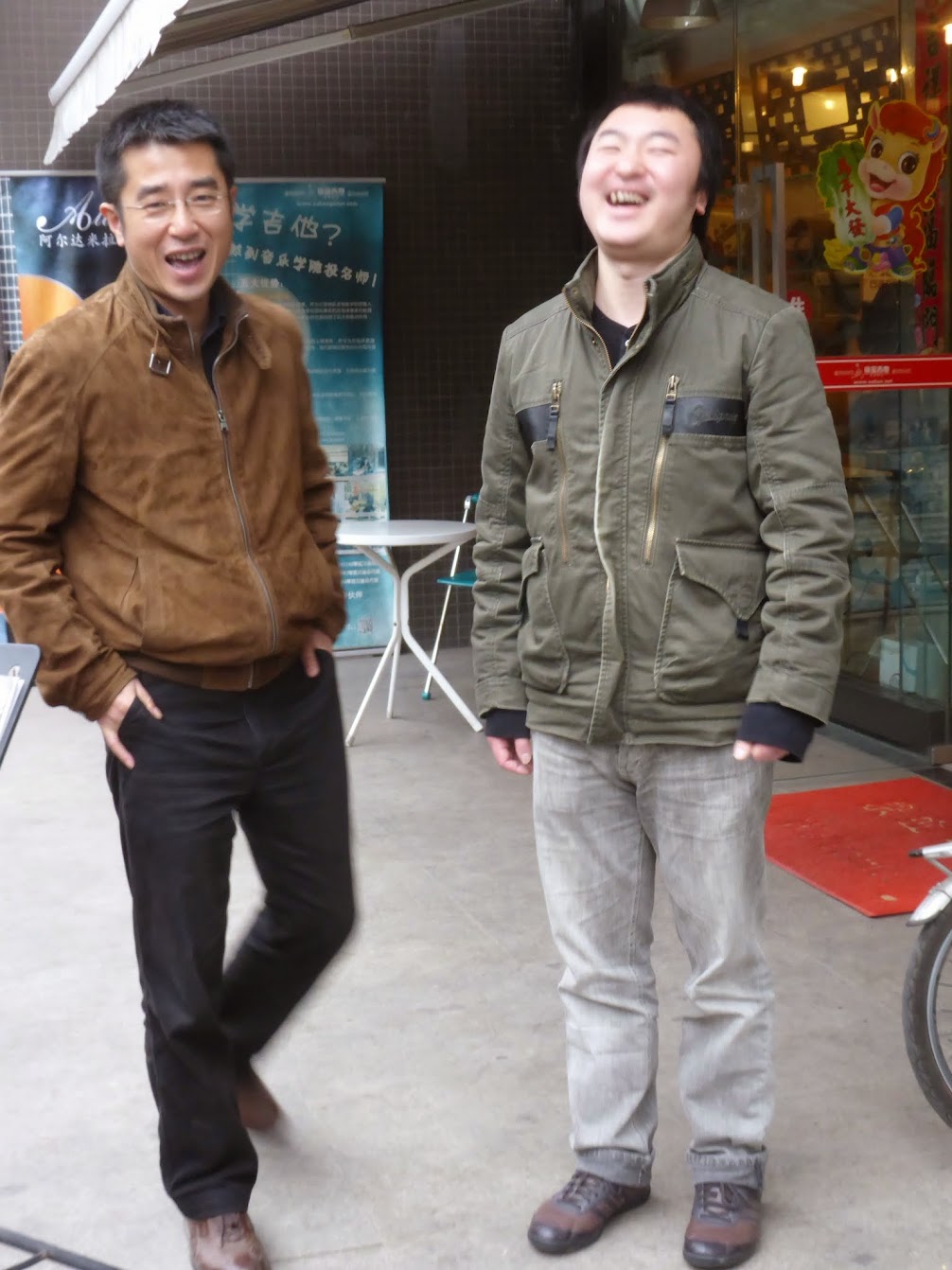 Xu Bao and Chengbin outside the shop Lu, GG, Junhong in the studio

We managed to finish the two CDs – done, dusted and edited in five days, with discussions and lessons on the pieces during the day as well as lessons for another 10 or so students.
So no time to see the pandas on this occasion, then!
Luckily we still had time to eat, although breakfast was a bit hazy after finishing regularly at 4.00-5.00am.

None of this would have been possible if I had not had a fine recording engineer with musical (and English) knowledge, who was so easy to work with it seemed that I was editing the CD directly.
His name is Lü Xin Long and it is worth keeping an eye out for his name, as he seems to be doing a lot of work at the moment in conjunction with the Chengdu YunTian Culture Communication Co.Ltd. On the final edit for Chengbin, he stayed up all night to master the CD so i could take it to Hanson Yao of Altamira when I went to Hong Kong the next morning. 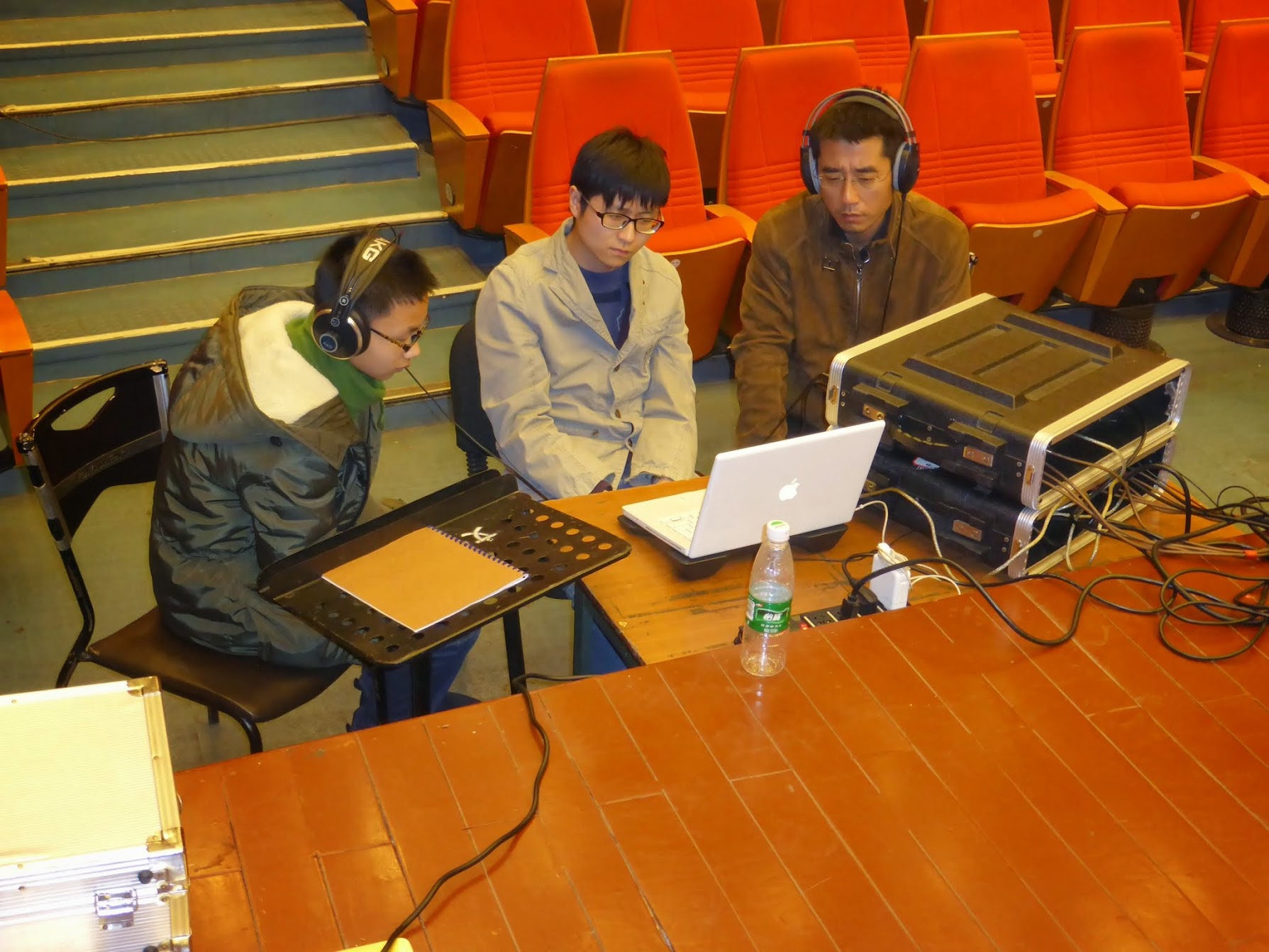 I also met another Chengdu kid to look out for – 11 year old Huang Yuexuan, who is extremely studious and serious about the guitar and also a bit of a laugh. His daily fare seems to be Villa Lobos Etudes 1 and 2, Bach Lute Suite 4 and Barrios Sueno en La Floresta. I would say he probably should get out more, but he does sometimes have to practise outside Xu Bao’s shop, which is in a leafy boulevard lined with instrument sellers and (for some unknown reason) hairdressers.

Xu Bao’s 200 or so students are divided between him and 4 or 5 other teachers, all ex students of his and it is all very hierarchical, but relaxed. We drank a lot of tea outside, mainly at dusk. Everyone was very respectful, hospitable and hard working. I felt very well looked after. 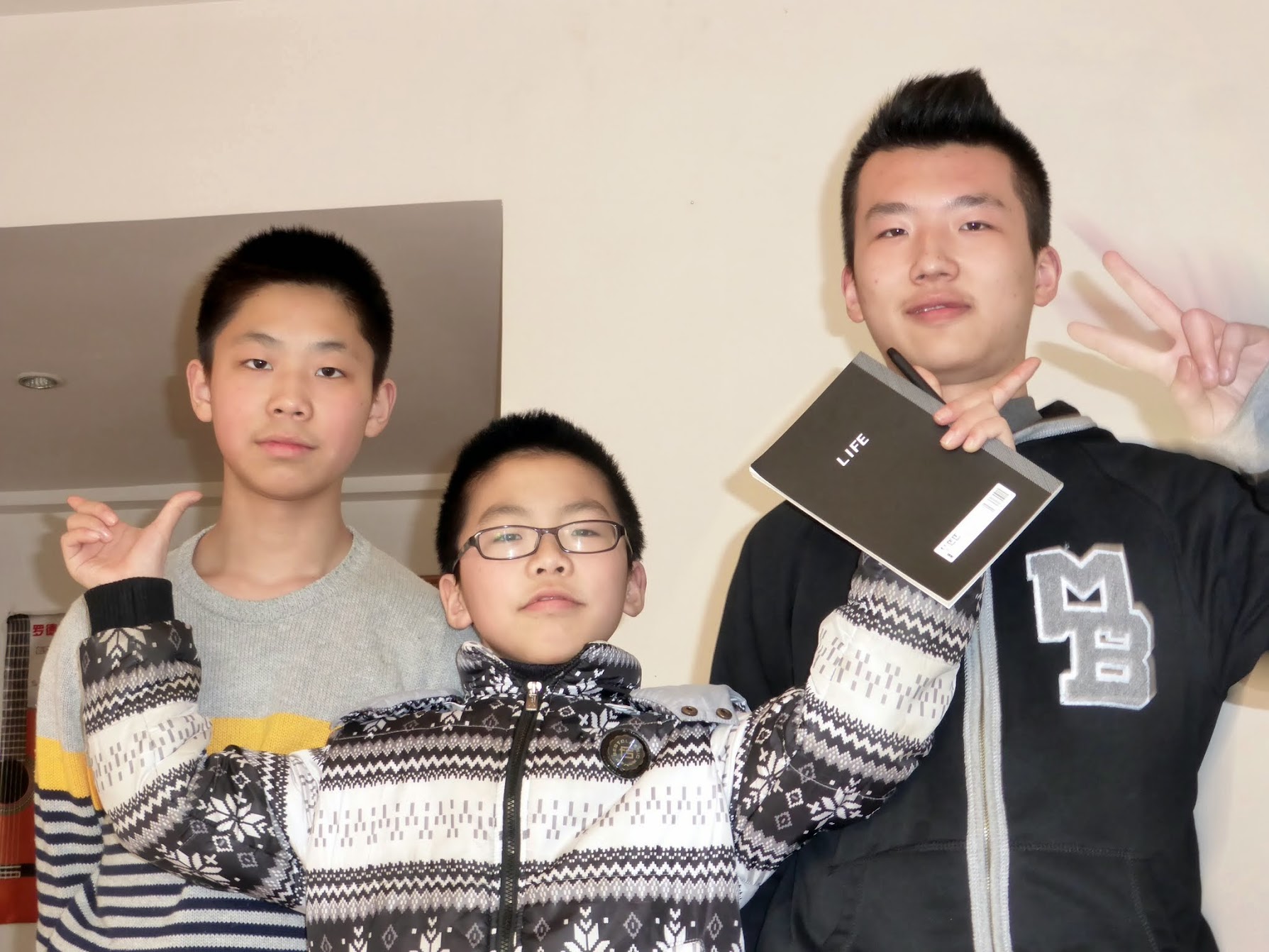 Huang YueXuan in the middle

You can listen to the interview I managed to snatch with Xu Bao during lunch just before leaving for the airport.
The next couple of days were spent in Hong Kong with Hanson Yao in his new guitar shop, with my friend and writer Jane Ram, and with my sister in law visiting from California and my 92 year old mother, but that is another story.

I had a wonderful time despite hard work and lack of sleep. Everyone was hospitable in a relaxed and human way. and I hope to return to Chengdu soon. It was great fun. Thank you all, especially Xu Bao, Hanson, Yang Yang, Zhu Re and of course the two artists, Junhong and Chengbin.
Maybe next time, I will get to see some pandas! If you haven’t come across him yet, Kuang Junhong is a 13 year old genius who plays the guitar with wonderful musicality. His teacher Xu Bao invited me over to Chengdu (in Sichuan Province) last month and I had the pleasure of teaching Junhong and many others of his talented pupils (as well as eating some fine Sichuan food – mostly mouth-numbingly spicy). There will be a few other young guitarists from this part of China you will eventually hear about. END_OF_DOCUMENT_TOKEN_TO_BE_REPLACED